Technology and Management Centre for Development (TMCD) University of Oxford, in collaboration with Innovate UK, China-Britain Business Council (CBBC), Institute of Sciences and Development of the Chinese Academy of Sciences (CASISD) and the Chinese Academy of Science and Technology for Development (CASTED) of the Ministry of Science and Technology (MOST) of China organised the second China-UK Innovation and Development Forum. The theme of the forum was “Driving Growth and Addressing Challenges Together”. This high-level event aimed at facilitating discussions on the most recent development in science, technology and innovation, and its impact on economic and social development in China and the UK. Discussions during the meeting addressed a wide range of policy related challenges in development and cooperation between China and the UK through intercultural dialogue. 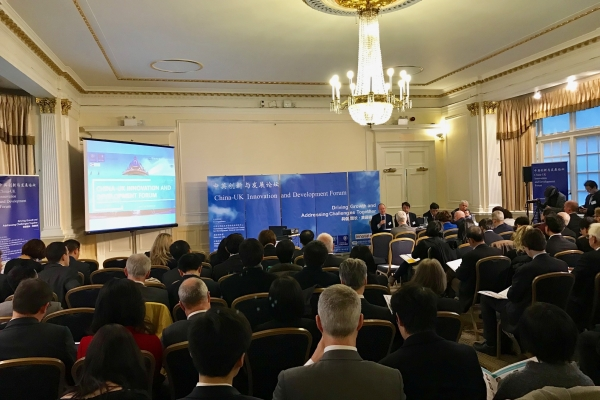 Discussions at the forum focused on three sub-themes: collaborations between academic institutions and businesses, emerging technologies and advanced manufacturing, and financial technologies and future digital services 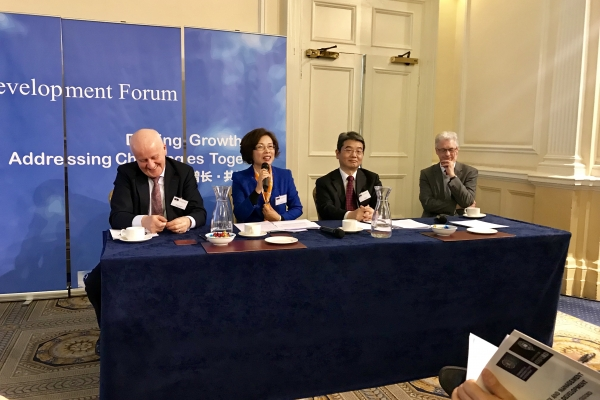 Kevin Baughan, Deputy Chief Executive, Innovate UK welcomed everyone to the Forum and mentioned that the forum was happening at a very important moment of strengthened relations between China and the UK. The welcome and keynote sessions among other things shed light on the importance of collaborations between academic institutions and businesses. Robert Easton, Pro-Vice Chancellor of University of Oxford in his address stressed that the forum is part of a broader overarching theme of people-to-people dialogue between China and the UK. He mentioned that the University of Oxford is poised to engage and take advantage of opportunities provided by the continuing dialogue between China and the UK. He said the University has over the years put together initiatives that closely align with research in science, medicine and social sciences in partnership with Chinese organisations. In line with this, the Oxford Suzhou Centre has been established and plans are for it to become a collaborative hub for UK and Chinese institutes and businesses. Ian White, Deputy Vice Chancellor of University of Cambridge echoed similar sentiments. He stressed the need for balanced curriculum with curiosity and innovation at its centre. He called for flexibility in collaborations between universities and companies so that companies can set up research centres in academic institutions, using University of Cambridge as an example, he highlighted complementary roles between companies and academic institutions based on shared vision and values. He said the collaborations will aim to harness academic resources for the advancement of research into technologies which will advance human progress. Jiaopeng Pan, President, CASISD, highlighted China’s innovation driven development strategies and China’s international collaboration with other countries including the UK.  Xiaolan Fu opened the keynote session by mentioning that China and UK will sign a very important cooperation strategy today and two distinguished experts from China and the UK who played important leading roles in the preparation of the document were present at the Forum. They were John Loughead, Chief Scientist Advisor, BEIS, UK and Zhijian Hu, president of CASTED MOST. John Loughead, traced the relationship between the two countries which he said started with curtesy, and then developed to respect and then now trust. According to him, the two countries are enjoying good friendship at the moment. He mentioned that in the UK, the exploitation of emerging technologies has led to the development of the green business sector which has created more than 350,000 jobs and around £14b per year of turn over. Zhijian Hu mentioned that even though to the outside world, China seems to have made a lot of progress, there are a lot of challenges on the ground and his organisation is increasingly finding new ways to confront and solve these challenges.  Matthew Rous, CEO of CBBC noted that there is a global consensus to grow the economy through innovation and the golden era of relations between China and the UK has coincided with this global consensus. According to him, CBBC has played a very important role in forging technological relations between the two countries by focusing on businesses and universities and they have been doing this for over 60 years. He stated that China provides a fertile ground for innovative solution like for example their strong eco system, supply chain with strong clusters, world class facilities and talents and phenomenal market size. China has moved from a follower to a leader in global affairs in terms of technological innovation. The UK on the other hand offers a transparent and well-established base for innovation and attracts global talents. He concluded by adding that complementarity exists between the countries and there should be stronger collaborations between the two countries where they learn from each other and work together not only in both countries but also in third countries. 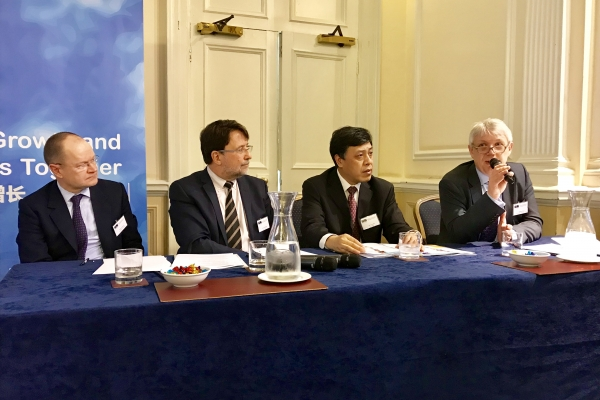 Chaired by Katrina Hayter, Head of Global Portfolio, Innovate UK, discussions on emerging technologies and advanced manufacturing focused on the importance of emerging technologies for advanced manufacturing. Speakers included Grace Lang, Director of Research Councils UK China, Chunliang Fan, Professor, CASISD, Gordon Luo, CEO, Huawei Technologies, James Colgate, Group Strategy Director, Williams F1, Jun Qiao, Chief Engineer, Changan Automobile Ltd (UK). Chunliang Fan traced the history of emerging technology in China and noted that it was the driving force behind the industrial revolution in China. Grace Lang defined emerging technologies as new ways of thinking and new ways of doing things. She mentioned that a strong research base is important for emerging technologies.  She stated that because research is key, the Research Councils UK China for 10 years has funded over 60 programmes ranging from space technologies, agriculture, and environmental science to creative industry. The speakers noted that their various companies are always exploring new technologies in production and this is key to their core values as companies. Jun Qiao highlighted the progress being made in the automobile industry and stated that his company is very much a part of these innovations. He stressed that improvement in electronic control is the future of the automobile industry. James Colgate mentioned that Williams F1 is constantly looking for ways to improve the speed of cars, clean energy for engines and the use of carbon fibre which is more efficient for their cars.  Gordon Luo mentioned that 5G technology has become a hot topic among industry players. 5G is speeding up progress and at a recent Huawei forum, there was an exhibition of 5G connected cars. He also stressed that big data is very important in their huge consumer market and that data will drive the 5G technology. The panel concluded by stating that education and cross fertilisation of ideas is very crucial when it comes to developing new technologies for advanced manufacturing.  Also, emerging technologies should be geared at making life simple for human being and this can most likely be achieved by building on existing partnerships. 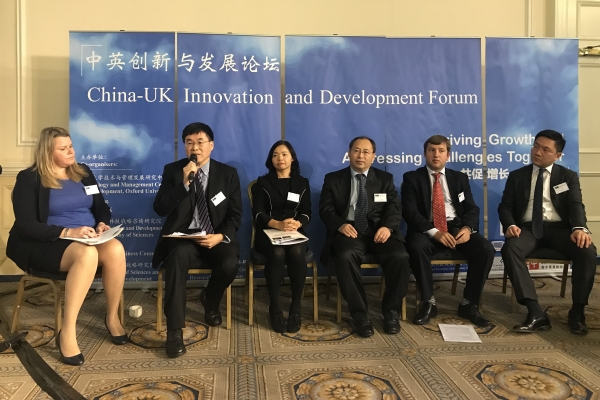 Discussions on financial technology and future digital services chaired by Nathalie Cachet-Gaujard, Director of Innovation and Education, China-Britain Business Council focused on how improved technologies impact financial and other digital businesses. Speakers included Yu Sun, Chief Executive Officer, Bank of China (UK) Limited, Paul O’Brien, Director of Global Service, Security and Operations reaearch, BT, Xuan Jin, Senior Evangelist EMEA, Alibaba Cloud International, Mark Collin, Group Director of ThoughtWorks Venture and Per Lindtorp, Director, GP. Bullhound.  The discussion began with various speakers addressing the question: what do you think are the emerging next future technologies and what impact they can have on digital businesses? Various speakers agreed that Artificial Intelligence (AI) is changing the way digital businesses operate because it has helped to reduce repetitive labour for example. Paul O’Brien mentioned networking, the software-fication of networks, virtualisation of the 5G space and personalisation of underlying IT infrastructure. Xuan Jin mentioned Quantum computing because according to him AI has not been evolving fast enough. He mentioned that what has been facilitating AI is cloud computing and data technologies. He hopes that cloud computing will lift the power of computing to new level. Per Lindtorp highlighted Cloud technology as important because it allows for true innovation like facial recognition and more security features. Mark Collin stressed that even though AI is important and an ambition that should be embraced, for more traditional businesses what is important is getting the data out. He stressed that technology can therefore not be discussed in isolation, what is important is building tools and technologies to help businesses get their data out. He stressed that software algorithms are important in this respect. Yun Sun mentioned that new technologies create challenges for older industries like banking services, even though improved technologies are the way forward, it creates challenges for banks in terms of how they manage their risks. He however stressed that financial technology is the future because in China for example there are 500 million people online engaging in various transaction. This according to him presents tremendous opportunities for businesses to tap into this market. 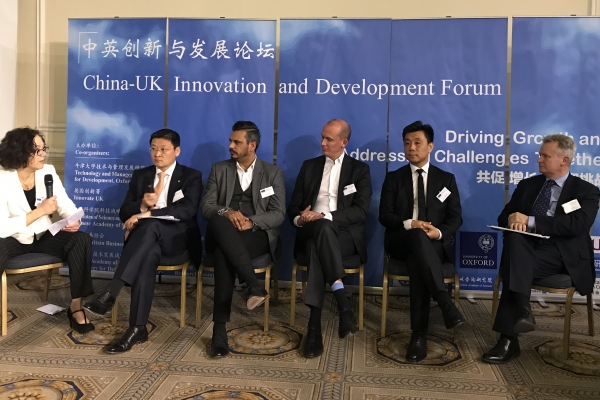 Discussion during the session also highlighted the importance of financial technologies in terms of aiding traditional financial services to provide new products for their customers, acquisition of digital banks from the larger banks and also understanding behavioural norms among younger consumers who are more tech savvy.  Speakers stressed that Fintech is an all embracing field from trading in global markets, more efficient algorithms to financial institutions. They mentioned that the success of Fintech will be driven by its attempts to solve various business related problems like making payment transactions. Technology should be an enabler and not the final decision maker. It should make life simpler and not take over human interaction. The panel concluded with various speakers calling for an open view to research in technology in both countries. They stressed that there should be collaboration with various industry players in both countries and with academia as well. They mentioned that raising money for research should be encouraged and prioritised by various companies because expertise is needed in the field of technology innovation.

In her concluding remarks Xiaolan Fu thanked speakers and participants for attending the forum and noted that discussions at the forum have highlighted new directions in technological change, its benefits, risks and impact. She stressed that change should be embraced cautiously and mentioned that there should be more forums in the future to discuss the many questions that have been raised at the meeting.

The forum is part of the 5th UK-China High Level people to people dialogue. This High Level people-to-people dialogue has led to the signing of the first innovation cooperation strategy between the governments of the two countries. Prof Xiaolan Fu, the Director of TMCD has been involved in the preparation of this cooperation strategy as a member of the UK working group.