The ESRC GCRF funded Inclusive Digital Model (IDMODEL) Project was completed on 28th February 2022.  The IDMODEL concluding conference was held online on Friday 25th February 2022 to report the research outcomes and receive comments about this project. It was attended by more than 43,000 people worldwide.

Professor Diego Sánchez-Ancochea, the Head of Department, at the Oxford Department of International Development, welcomed the audience.  He noted that the project had started in 2018 and continued throughout the Covid pandemic. He explained that it had been based on horizontal and constructive collaborations between the UK partners and the SBK Foundation in Bangladesh. The IDMODEL project results were significant academic findings that would also help social enterprises through the ‘Hand to Hand’ App. This APP enabled marginalised people in developing countries to generate income and empower themselves using a digital platform, and had great replication potential. Heidi Schroderus-Fox, Acting High-Representative for the LDCs, LLDCs and SIDS, at the United Nations, noted that the IDMODEL project was of particular interest because it was based on solutions that could help  deliver the ambition of achieving universal broadband connectivity. The project results relating to younger adults aligned with her teams findings from 2018.

Professor Frances Stewart, Leontief Prize Recipient, Professor Emeritus of Development Economics at the University of Oxford, noted that this project had demonstrated how it could innovatively contribute to improving people’s lives in developing countries. The IDMODEL project showed how improved digital skills and information dissemination can open up opportunities for marginalized people by providing access to information about  markets, technologies, credit and other general opportunities.  This project had also provided “hard” evidence that it could make a real contribution to improving people’s lives. Other speakers at the event included Opeyemi Abebe, Professor Jiang Yu, Professor Akbar Noman, Professor Elisa Giuliani and Professor Ulf Elg, from the Commonwealth Secretariate, the Chinese Academy of Sciences, Columbia University, the Unversity of  Pisa, and Lund University.

Nobel Peace Prize Laureate, Professor Muhammad Yunus was the special guest at the event who delivered the keynote speech. He spoke about the implications of technology for inclusive development, noting that the ability to use technology in a positive or negative way lay with humans, as technology does not currently have its own mind. He noted that care must be taken to concentrate on using IT to help people, and explained how Grameen Bank was doing this. Professor Fu agreed that there was a need to focus on inclusive development when adopting digital technologies. The IDMODEL project was designed with the aim to ensure that marginalised people could be reached.

Torbjörn Fredriksson, Head of E-commerce & Digital Economy, of the United Nations Conference on Trade & Development, delivered the conference concluding remarks. He noted that the IDMODEL project had looked at China and Bangladesh, two very different countries that had big differences in the levels of use of technologies. He said that because people set the rules for digital solutions, digital and data governance was important. He noted that the IDMODEL project had generated many new findings that can help inform future discussions on how to harness technologies for the many rather than the few, and had emphasised on how technologies could be used to help create value in rural areas and beyond. He congratulated the partners for delivering this project. 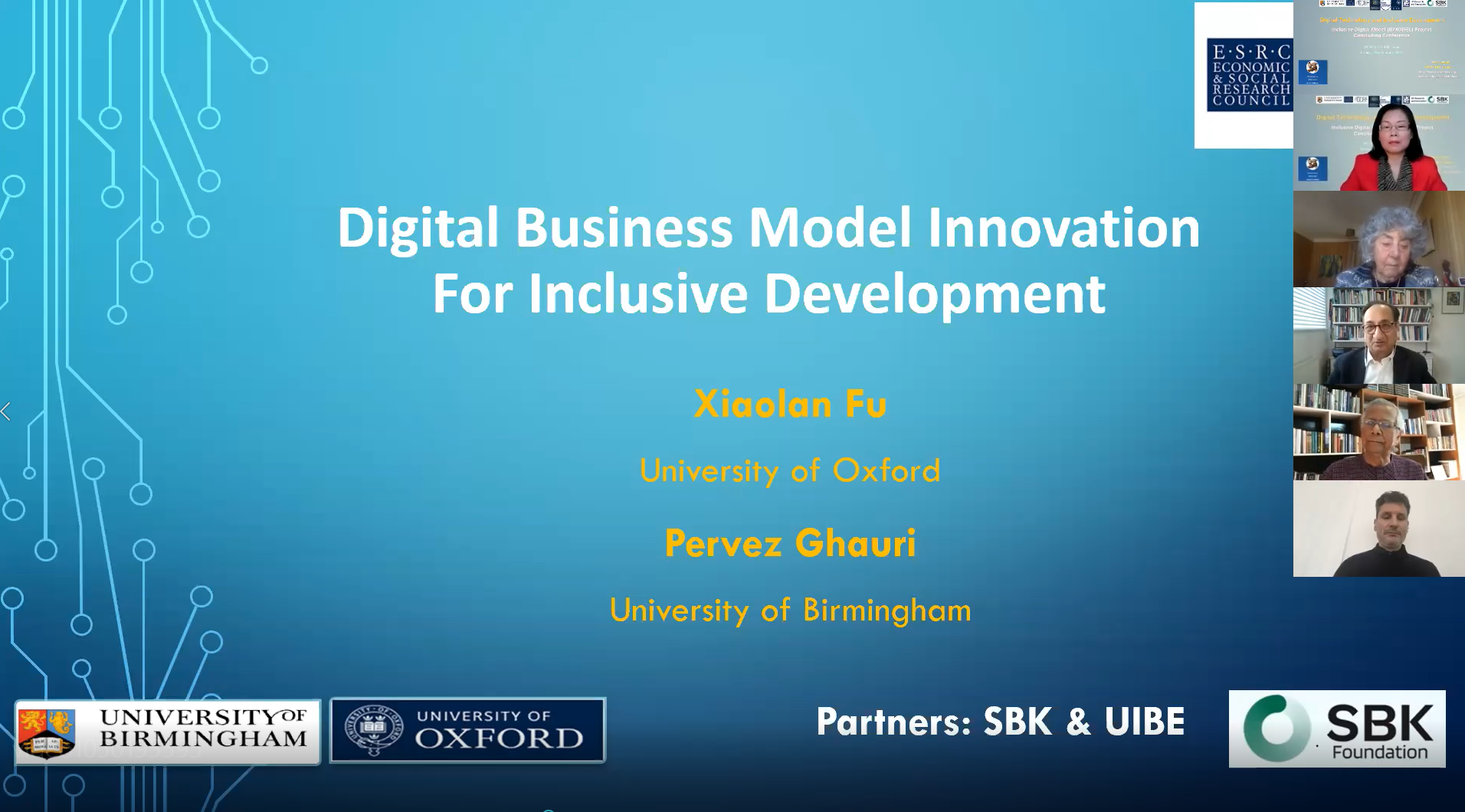 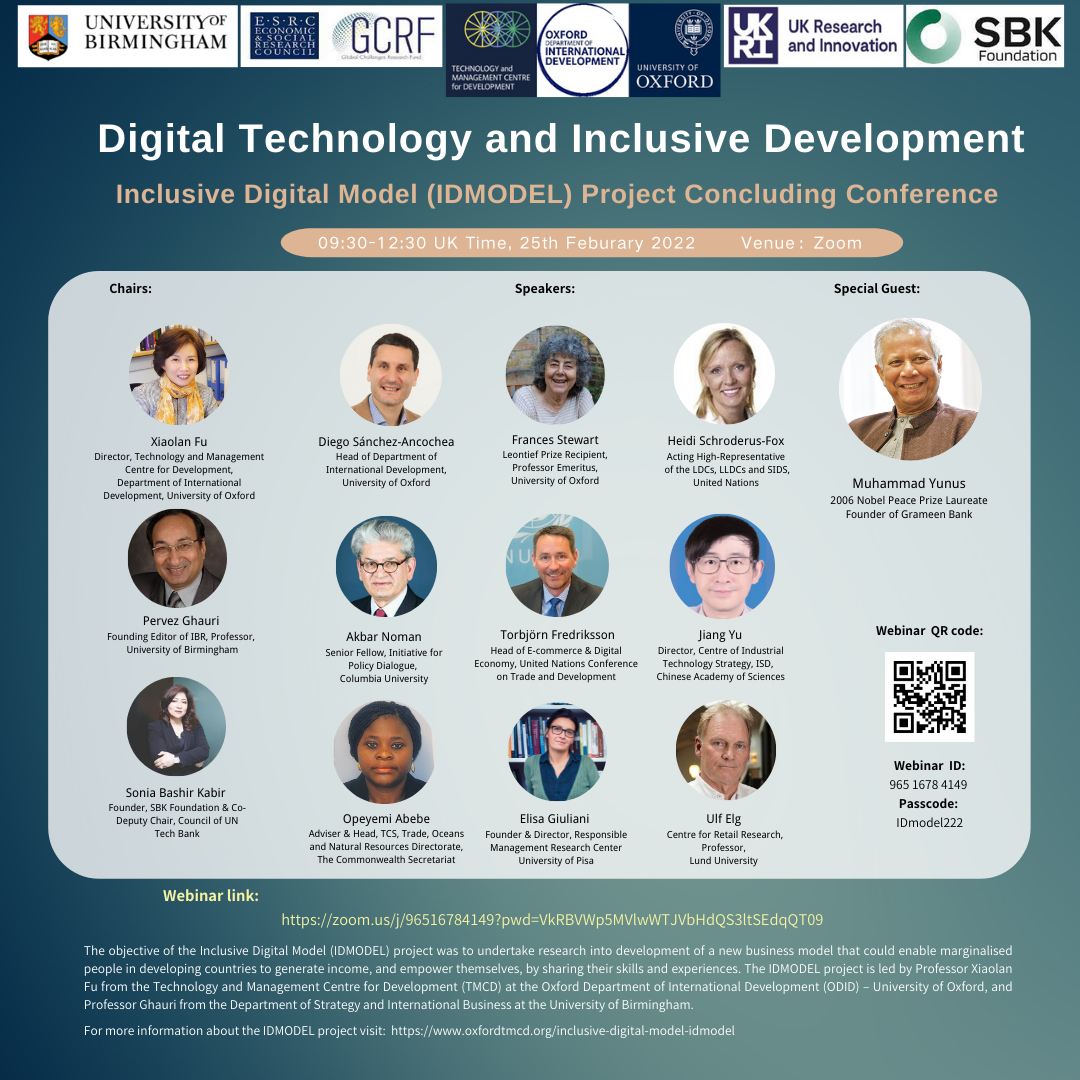